Amitabh Bachchan has showered love on his ‘May Day’ co-star Ajay Devgn for completing an illustrious journey of three long decades in the industry. Big B wrote, “#AjayDevgn , completes 30 years in the Film Industry , on 22nd Nov , when his film ‘Phool aur Kante’ released. Soft spoken, non interfering, yet filled with passion. My congratulations Ajay, may you continue for another 70.” Ajay Devgn soon replied to B Big, thanking him for the blessings. Ajay marked a smashing entry in Bollywood in 1991 with ‘Phool Aur Kaante’ and won Filmfare Award for Best Male Debut for his act. 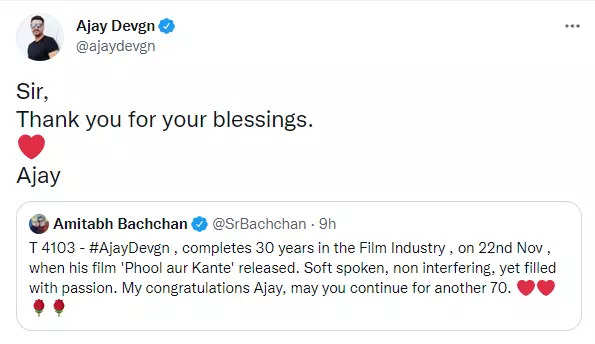 Ajay Devgn and Amitabh Bachchan are all set to reunite for ‘Mayday’, which stars the former in the role of a pilot, while details of Big B’s character have been kept under wraps. This film also marks Ajay’s return to direction. Speaking about working with Big B, Ajay had told PTI, “He is a delight to work with. I’ve never seen a more dedicated actor, we are nothing in front of him. Once he is on set, he will keep rehearsing, keep thinking about the scene. It’s phenomenal. I’ve known him since I was a kid. So whatever I had to take away from him, I must’ve taken it back then. It’s imbibed. With him, it’s a different rapport.”