Keeping up with his bail conditions, Arbaaz Merchant visited the NCB office today to mark his attendance. The young lad was accompanied by his father Aslam Merchant.

After marking his attendance, when Arbaaz left the NCB office, he was asked to pose for pictures by the paparazzi who were waiting outside. Despite his father’s insistence, he refused to pose for the shutterbugs.

Check out the video here: 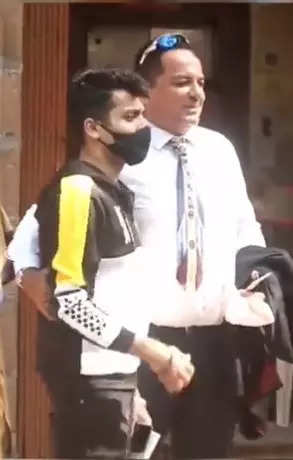 Arbaaz, Shah Rukh Khan’s son Aryan and Munmun Dhamecha were arrested by the Narcotics Control Bureau on October 3 after they raided an alleged rave party on a Goa-bound luxury cruise in Mumbai.

The trio was initially kept in the NCB custody and later shifted to Arthur Road jail where they spent about 22 days before they were finally let out on bail by the Bombay High Court.

As per the detailed order of Justice N W Sambre on bail pleas of Aryan Khan, his friend Arbaaz Merchant and fashion model Munmun Dhamecha, WhatsApp chats extracted from Aryan’s phone showed that nothing objectionable was noticed to suggest that he and others had hatched any conspiracy.

“There is hardly any positive evidence on record to convince this court that all the accused persons with common intention agreed to commit unlawful acts,” the court said.