Fake celebrity meet and greets have become one of the most alarming online scams that frauds use to swindle victims out of their hard-earned money these days. Recently popular actor-singer Govinda came across one such scam which used his name to lure people.

As soon as he saw the advertisement he warned fans that it is fake. The advertisement said that fans can meet the actor at a Lucknow event. Govinda shared the poster of the fraud event on his Instagram handle and insisted that it is “false news”. 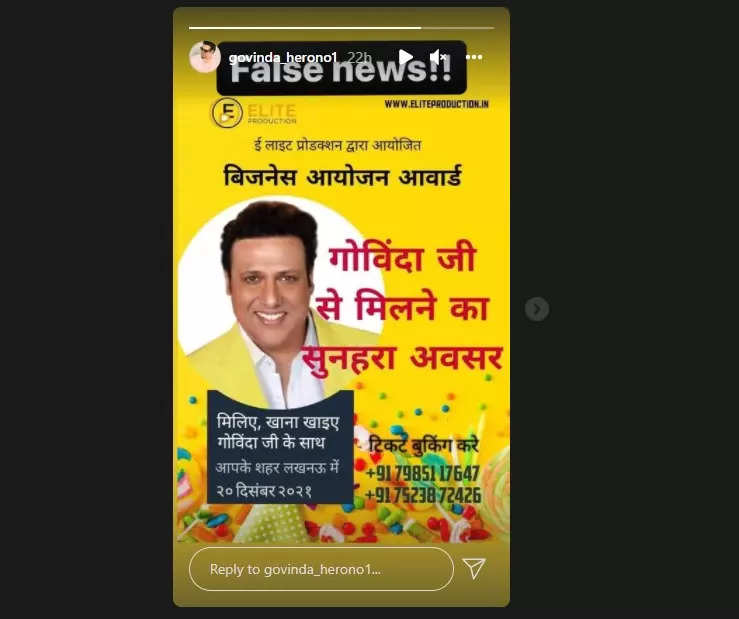 As you can see in the poster it speaks of an event to be held in Lucknow on December 20. The event, according to the fake poster, gives fans a ‘golden opportunity’ to meet Govinda and even share a meal with him. There are also ticket booking details mentioned in the advertisement.

Meanwhile, the seasoned actor recently released his own version of the ‘Tip Tip’ song and it has taken the internet by storm. The song titled ‘Angan Tera Tarsa Toh Tip Tip Paani Barsa’ has been directed, written and sung by Govinda himself. The music video sees some sizzling chemistry between the actor and model-actress Soniya Kashyap. Fans are already celebrating Govinda’s amazing moves. The peppy song reminds us of how much we miss him on the silver screen.

“I have ensured that I entertain my fans who have showered me with their love and blessings each time. The global disruption took online viewership to unprecedented heights and I believe this is the best way. I reach out to my fans who can now watch me anytime, anywhere, and on any device,” Govinda had said while sharing the music video.