A final hour which sealed the Ashes for Australia?

It was a final hour which will live long in the memory and one which may well have sealed the Ashes for Australia.

For most of day two in what is a must-win third Test for England they had fought back with a terrific bowling performance.

Trailing by 82 runs in the second innings, the mission was pretty straightforward for England’s batters – survive the next 12 overs until the close of play.

But it was a mission failed.

The elements combined as hostile pace bowling from Pat Cummins, Mitchell Starc and Scott Boland, a feverish atmosphere whipped up by a raucous Melbourne crowd, and a fragile England batting line-up, combined to leave the tourists reeling on 31-4 at stumps.

Let’s take a look back at that thrilling end to the second day.

As openers Haseeb Hameed and Zak Crawley marched to the middle, Test Match Special pundit and former England bowler Steven Finn – perhaps on a high from England’s bowling performance – was in a hopeful mood.

“England will want a minimum of being 200 runs ahead after their second innings,” he said. “I don’t think asking them to score 280 is out of the question.”

A vicious short delivery from Cummins in the second over deflected off the handle of Hameed’s bat and then a beauty from the seamer beat Crawley’s outside edge.

“This is going to be an intense 45 minutes,” Jonathan Agnew said on TMS.

While pumped-up captain Cummins continued to unsettle the England openers, including inducing an edge from Crawley which somehow evaded wicketkeeper and first slip, it was his bowling partner Starc who made the early breakthrough…

Kent’s Crawley replaced Rory Burns as opener for this Test, but scores of 12 and five left Agnew questioning the change.

“Why was he brought in?” BBC cricket correspondent Agnew asked on TMS.

“The only place they’ve seen him bat this tour is in the nets and that’s completely different to being out there in the middle.”

England were 7-1 but the next man in was Dawid Malan – one of the better-performing England batters on the tour down under and capable of steadying the ship.

But what England did not account for was a fired-up Starc at the top of his game.

Malan was done for pace and, after a failed review, trudged back to the dressing room for a first-ball duck…

It was two in two for Starc and Australia.

“Once again, an England innings is in disarray,” Australian cricket commentator Geoff Lemon said on TMS.

The time was 06:58 GMT – whether you’re an England fan who did the night shift or one who was up before daylight, the mood was the same…

Cries of ‘oohs’ and ‘aahs’ followed every rapid Starc and Cummins delivery. It was pace bowling at its finest as appeal after appeal was turned down by the on-field umpires.

England captain Joe Root and Hameed had just about weathered the Cummins storm. A change in bowling brought Test debutant Scott Boland into the attack.

The noise level turned up a notch as the Melbourne crowd cheered on hometown boy Boland.

And on his third delivery, Boland removed Hameed with a cracking delivery…

Hameed has scored 25, 27, six, duck, duck and in the series so far. Some England fans are starting to lose patience…

But Agnew believes luck has not favoured Hameed in the Ashes and is willing the 24-year-old to find some form.

“Hameed seems to attract good balls at the moment – I feel sorry for him,” Agnew said.

“I don’t know who he has offended. He’s having a hard time but I really want him to get a good score because he can bat. I’ll be disappointed if they drop him.”

England sent in Jack Leach to see off the nine deliveries left in the day.

But if ever there is a sign of a team being backed up on the ropes, it’s your nightwatchman shouldering arms and being bowled for a second-ball duck…

Bowland was mobbed by his team-mates as roars echoes around the MCG.

Ben Stokes joined Root in the middle as England reached stumps with no further dismissals but with an absolute mountain to climb.

“What an hour that was. I’m still coming down from it. It was Test cricket at its absolute best and brutal,” Agnew said.

As you might expect, this former Australia great was loving it…

While the English mood was perhaps best summed up Isa Guha…

Seamer Anderson cut a frustrated figure as he spoke to TMS at the close of play.

“We battled hard to get those 10 wickets and then a really disappointing end for us,” he said.

“With 12 overs to battle through and as good the spell was from Starc and Cummins, to lose four wickets in 12 overs was very disappointing.”

The overwhelming feeling among fans was sympathy for England’s bowlers, anger towards the batters, and a sense that there is a 5-0 clean-sweep looming… 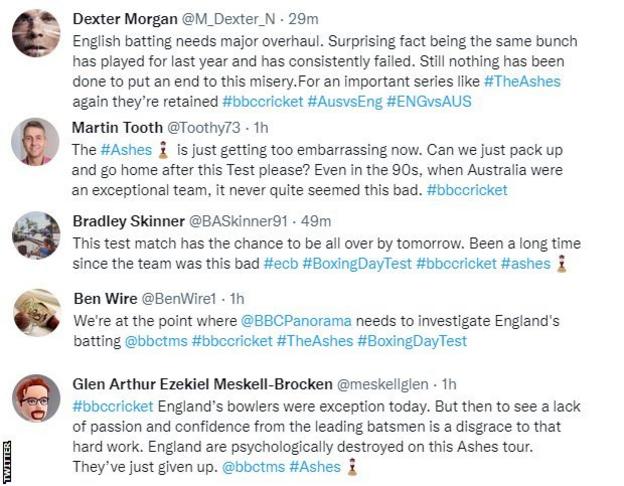 Finn, meanwhile, is holding on to what little hope is left.

“From the position England are in now, if they can get to a 120-run lead then there is something to play for,” he said. “I still think this is a naughty wicket.”