Rejuvenated England breathed life into their World Cup defence with a four-wicket hammering of India in Mount Maunganui.

The holders were transformed from the team riddled with errors in three previous defeats, taking every catch and nailing two direct-hit run-outs to bowl India out for 134.

In a nervy start to the chase, England were reduced to 4-2, while Nat Sciver survived the ball hitting her stumps without the bails coming off.

Sciver went on to make 45, while captain Heather Knight ended unbeaten on 53 as the chase was completed with more than 18 overs to spare.

In registering their first win, England move up to sixth in the table, only two points behind third-placed India, with the top four qualifying for the semi-finals.

However, they cannot afford another slip-up and face another must-win situation when they meet hosts New Zealand in Auckland on Sunday (22:00 GMT, Saturday).

India, who look to be in a scrap with England, New Zealand and West Indies for two semi-final spots, go on to face tournament favourites Australia on Saturday (01:00 GMT).

Just as there was no explanation for the wides, dropped catches and fielding errors in the defeats by West Indies and South Africa, it is hard to know why England were an entirely different outfit against India, the side they beat in the thrilling 2017 final.

Indeed, in the day between this game and the dispiriting loss to the South Africa, none of the XI trained, yet England arrived looking refreshed, relaxed and energised.

An indication of what was to follow came from the first very ball, when Sciver’s throw just missed running-out Smriti Mandhana. From then on, everything went England’s way.

Shrubsole bowled a superb length to have Yastika Bhatia play on and captain Mithali Raj caught at point, before Kate Cross’ direct hit from mid-off accounted for Deepti Sharma.

When Dean, who bowled with flight, dip and control, had both Harmanpreet Kaur and Sneh Rana caught behind in her first over, India were 61-5.

While Mandhana remained, India were dangerous, but a missed sweep at Sophie Ecclestone had her lbw for 35.

Though Richa Ghosh, made 35, adding 37 with Jhulan Goswami, they both fell in the same Cross over. First Ghosh was run out by Sciver’s swoop and throw from mid-wicket, then Goswami chopped to point.

Dean returned to take the last wicket, bowling Meghna Singh for her best figures in an ODI. 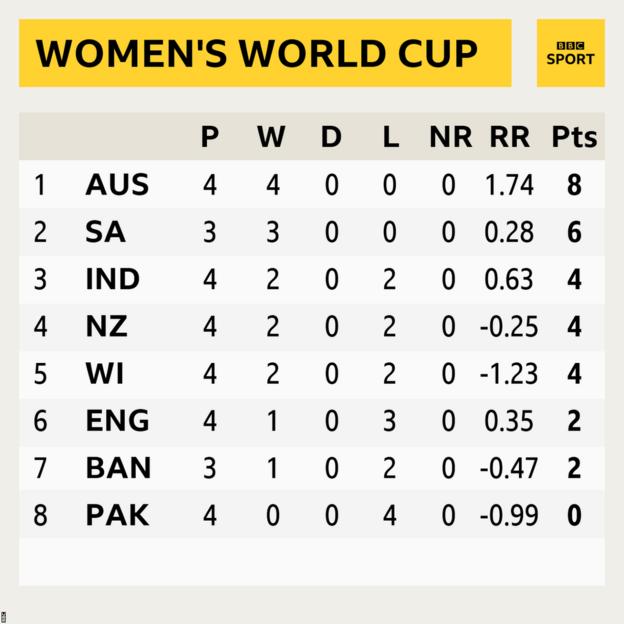 In the face of some excellent swing bowling by Meghna and Goswami, England saw Danni Wyatt well held at slip by Rana and Tammy Beaumont trapped lbw on review.

Then came an extraordinary moment of fortune for Sciver, a direct contrast to the defeat by South Africa, when she was desperately unlucky to be caught off the back of her bat.

This time, when on just four and with Goswami bowling, Sciver jammed down, only for the ball to roll back on to middle stump. Incredibly, the bails remained unmoved.

Reprieved, Sciver batted with power and authority before she gave a leading edge off Pooja Vastrakar, leaving Knight to bring up her first half-century of the tournament.

Though it was sloppy of England to lose three wickets for 22 runs, Knight remained as a reassuring presence and a six-match winless streak was broken.

England remain in a perilous position, but head into the meeting with New Zealand still as contenders to win the World Cup.

‘I wasn’t expecting this’

England off-spinner Charlie Dean, who was named player of the match: “I don’t think I was expecting this at the start of the game so I’m really happy.

“We have shown a lot of fight as a team to come back from a few disappointing games to show what we can do. So really happy.

“I just tried to keep it simple, bowl as close to the stumps as possible and trust my best ball.”

England captain Heather Knight: “A bit of relief, to be honest. I think we needed that. It was a little bit scrappy, and we lost a few more wickets than we’d like, but just to get over the line is really nice for us and hopefully the start of a momentum shift.”

Ex-England spinner Alex Hartley on Test Match Special: “India know they underperformed but England will breathe a huge sigh of relief. They have been brilliant today, the England side we all know and love. They have played fantastically.”

[ad_2]
Source link
Previous England skittle India for 134 to boost World Cup hopes
Next Stealth Omicron Symptoms: China’s COVID outbreak fueled by Stealth Omicron; here’s what it is and symptoms to watch out for