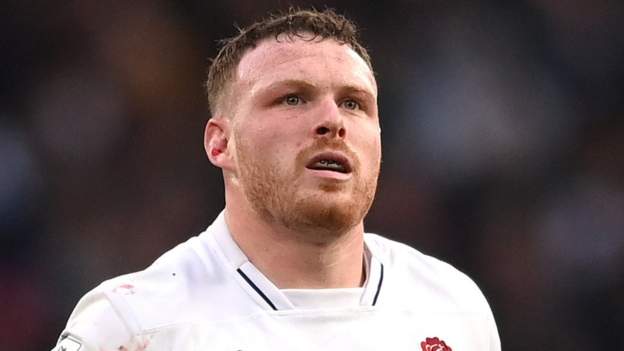 France are world’s form side – Simmonds

The Six Nations finale with France on Saturday is an opportunity for England to show they can match the best in the world, says forward Sam Simmonds.

Eddie Jones’ side travel to Paris hoping to stop France sealing a Grand Slam and in the process salvage another underwhelming Six Nations campaign.

“They’re probably the form team in the world,” the 27-year-old Exeter back row told BBC Sport.

“It is an opportunity to show what we are about.”

Jones has named a 28-man group to travel to Paris, with wing Max Malins left out despite starting all four of England’s matches so far this championship.

The uncapped Harlequins pair of wing Louis Lynagh and centre Luke Northmore have both been included, as has Wasps tyro Alfie Barbeary, while Nic Dolly has replaced Jamie Blamire as Jamie George’s back-up at hooker.

With Tom Curry ruled out, Sam Underhill is in contention to start at openside flanker, although Simmonds might shift to the number seven shirt in order to accommodate Alex Dombrant at number eight

England will confirm their matchday squad of 23 on Thursday evening.

‘We weren’t good enough to win’

England battled hard with 14 men against Ireland in their last game before falling to a heavy 32-15 defeat at Twickenham.

“Pride is a good word, but ultimately we didn’t win, we weren’t good enough to win,” added British and Irish Lions forward Simmonds.

“We need to recharge our batteries now, emotionally and physically, for what is going to be a huge game in Paris.”

Another defeat for England would mean they have managed just two wins in the campaign for a second successive championship.

Simmonds is well aware of the consequences of failure at the Stade de France, where New Zealand were beaten 40-25 in the autumn.

“Obviously we want to win, we have wanted to win every game we have gone into,” he added.

“We have talked this week about [this being] an opportunity, an opportunity to go to France and stop them winning a Grand Slam in their home stadium.

“It is also an opportunity for us to show we are a team that can go up against the best.

“All the talk will be about France but hopefully we can go there and do a job. Being underdogs in this situation, and then going out there and being physical, which we have done in patches this tournament, it’s quite exciting.”