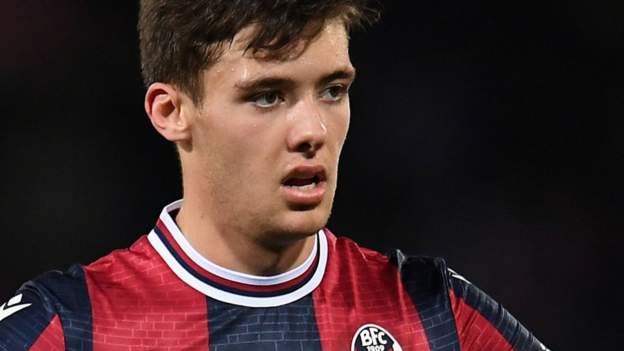 Hickey called up to Scotland squad

Bologna’s Aaron Hickey has been called up to Scotland’s squad for next Thursday’s friendly with Poland.

The Serie A defender, 19, has never been capped at under-21 or senior level but has turned out for Scotland’s under-17 side.

Goalkeeper David Marshall, who featured at Euro 2020, and midfielders Lewis Ferguson and Ryan Jack are recalled.

But there is no place for Newcastle winger Ryan Fraser, despite two goals in his past seven appearances.

Nathan Patterson remains in the squad, even though he has featured just once since joining Everton from Rangers in January, with Motherwell captain Stephen O’Donnell another option at right wing-back.

Hickey has established himself as a left-back, but can play on the right or in midfield. Under-21s coach Scot Gemmill elected to omit Hickey from his latest squad following recent discussions with the former Hearts man, commenting: “He’s got his own thoughts and we have to respect that.”

Steve Clarke’s senior side are playing the Poles instead of their postponed World Cup play-off semi-final against Ukraine. The game will be played at Hampden with £10 from each ticket sold going to Unicef’s response in Ukraine following Russia’s invasion of the country.

Poland had been scheduled to play Russia on 24 March, but have been given a bye into a final with Czech Republic or Sweden on 29 March, with Russia removed from the qualification process.

Scotland and Ukraine hope to meet in June, with the winners going on to face either Wales or Austria, who meet in Cardiff next Thursday.

Clarke will take his side to play another friendly away to the losers of Wales v Austria on 29 March.

Poland are 28th in the Fifa rankings, 12 places above Scotland, and the two nations twice drew 2-2 during the Euro 2016 qualifying campaign.