Wales will seek to end France’s bid for a first Six Nations Grand Slam since 2010 when the sides meet at the Principality Stadium on Friday.

Thirteen tries so far is testament to their flair but their defence has also been transformed by Shaun Edwards.

Wales’ hopes of retaining their title are effectively over following defeats by Ireland and England.

How they could have done with their former defence coach Edwards during their 23-19 defeat by England at Twickenham in round three.

A dreadful and ill-disciplined start that saw them fall 17-0 behind and they can ill-afford to begin the same way against Fabien Galthie’s in-form France.

Recent matches between these two teams are normally tight – last season France secured a last-gasp 32-30 win in Paris to deny Wales a Grand Slam – and the hosts will need to be firing on all cylinders if they are to contain the red-hot Six Nations favourites.

If France win they will face England in Paris on Saturday, 19 March for the title and Grand Slam, while Wales will play Italy at home in their final match.

Wales have made four changes from the side that lost to England with two of them in the back row.

Josh Navidi is fast-tracked back into the side after five months out with a shoulder problem, while Seb Davies starts at blind-side flanker, in a change from his usual position as a lock.

Taine Basham is dropped and Ross Moriarty moves to the bench.

Gareth Thomas is chosen ahead of Wyn Jones at loose-head prop and veteran centre Jonathan Davies starts after Nick Tompkins sustained a concussion playing for Saracens.

France captain Antoine Dupont has been passed fit despite injuring his arm during training on Tuesday.

There is one change from the starting XV that beat Scotland as winger Gabin Villiere comes in for Damian Penaud, who has tested positive for Covid-19, while replacement lock Romain Taofifenua also drops out of the match-day 23 because of coronavirus.

Eddie Butler: Can Wales do it? They have been improving with every game, once the opening 50 or so minutes are out of the way, that is. It may be a little bit important for the home team on Friday night to turn up before the 9 o’clock watershed.

Seb Davies, a mystery unto himself but as talented a ball-player as there is across the continent, comes into the back row, as does the rather earthier Josh Navidi. It would be interesting to see what the French analysts made of this new duo on either side of the peerless Taulupe Faletau.

This goes completely against the form book, but we are waiting for the surprise that always comes… Wales 34 France 28. View from both camps

Pivac on selecting Tomas Francis after his head injury against England: “We have a very experienced medical team who we think are world class.

“The return-to-play protocols set by World Rugby have been followed. They are very stringent.

“We have gone the extra mile in terms of Tomas and got an independent concussion specialist involved.

“He has the history of the player, has looked at the footage of the match and understands the protocols of World Rugby, and he is supportive of the fact that the player has been cleared to be selected.

“It is not something we do lightly, because a player’s health and well-being is in the forefront of all these decisions.”

“We’d largely been spared that until now, but that’s the way it is. We have the resources to front up against Wales.

“We are preparing for it: we are waiting for information from the Six Nations Committee to find out if and when we will be retested.

“Psychologically, it’s brutal. But we’ve got to keep going and the guys coming in are ready.” 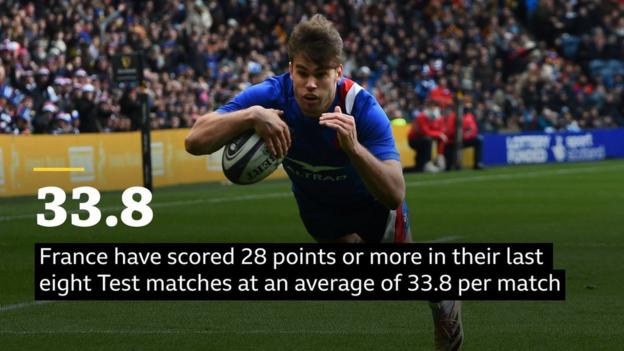