With one round left to go in the 2022 Six Nations, only two sides remain in the hunt for the title.

France would seal a first Grand Slam and title since 2010 with victory against England – but should they fail, Ireland are also in with a chance as they host Scotland earlier on Saturday.

Much of the focus after England’s defeat by Ireland was on the hosts’ bravery for staying in the game for so long with 14 men.

Now that the dust has settled, the same issues that have been plaguing England since the 2019 World Cup have returned to the spotlight.

Former England fly-half Cipriani says the side was “outcoached” in attack against a slick Irish team.

Discounting their comfortable win against Italy, Eddie Jones’ side have scored two tries across three games in the tournament and are unlikely to win in France unless this statistic gets a boost.

“England’s set-piece, kicking game and defence are part of their identity,” Cipriani said.

“What has the attacking identity looked like? You can say how great we were at the set-piece and we made good decisions.

“But Ireland constantly put England under pressure, their attack was cohesive. To do that, you need to have good direction as a coach and a system you can fall back on 90% of the time.

“The talent pool that England have, if you can’t put a good system in place to execute in attack, then what are you doing as a coach?” 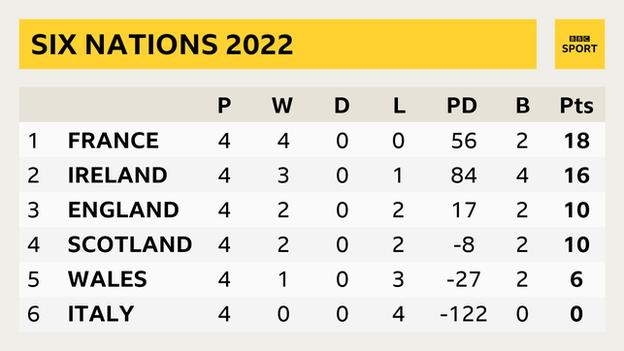 In contrast to England, Ireland delivered a sharp attack at Twickenham.

Player of the match Jamison Gibson-Park pushed the pace of play to a speed England struggled to cope with and, were it not for handling errors, Ireland could have come away with more than the four tries they scored.

If France lose to England, Ireland would win the title by beating Scotland earlier on Saturday and Cipriani believes they will “build on” their Twickenham win in Dublin.

“In terms of the system and the breaking down of the defence, Ireland didn’t look stressed whereas England were often stressed,” Cipriani said.

“When it’s quick ball, you play what is in front of you. They are on the move, attacking what’s in front of them and allowing all the players to make good decisions with it.”

‘No complacency’ for France

Like Ireland, former England wing Monye believes France will be an improved side on the final weekend.

Fabien Galthie’s team scored just one try as they overcame a determined Wales 13-9 in Cardiff and Monye says having to work so hard for that win is perfect preparation as they seek a first Grand Slam and title since 2010.

“France had to dog out their win,” Monye said.

“Had they gone and blitzed Wales, complacency could creep in. Their usual efficient attack didn’t work and they had to work hard.

“That complacency is gone.”

In Dublin, Ireland’s attacking prowess will only be further fuelled by Scotland’s struggling defence.

Gregor Townsend’s side conceded 22 points against Italy – 12 more than any other team against the Azzurri in this year’s tournament.

Scotland have conceded 95 points in total in the opening four rounds, with Italy the only side to concede more, with 160.

Monye said the defensive performance in Rome was “not good enough”.

“Are they going to be good enough this weekend to finish this competition on a positive note?” Monye asked.

“I can’t see it happening. Scotland’s attack hasn’t always functioned so when the thing you rely on, defence, isn’t quite functioning you can lose composure.”

As for Wales, Warburton believes they are “building” after a solid showing against France.

Wayne Pivac’s side dominated territory and possession in the second half but could not convert that into tries.

When they did manage to find gaps in France’s stellar defence, scoring opportunities were scuppered by handling errors.

The defeat for Italy means they have still not won a Six Nations game since 2015, but there was some good news for the side on Saturday.

After the loss, centre Marco Zanon proposed at pitchside to his partner, Italian athlete Ottavia Cestonaro.