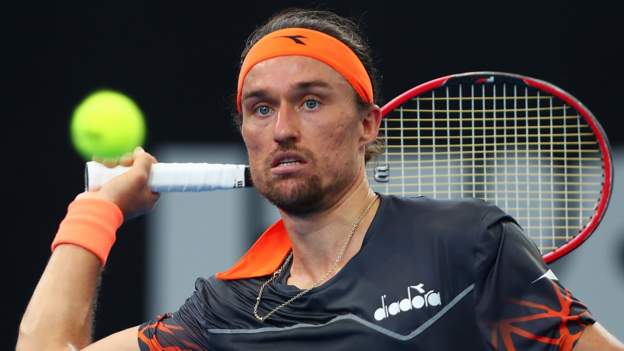 Ukrainian former tennis player Alexandr Dolgopolov says tennis authorities are being “too passive” and should ban players from Russia while there is war in Ukraine.

The 33-year-old told BBC Sport the decision to allow Russian players, such as men’s world number one Daniil Medvedev, to continue playing as neutrals and removing their flag “is not changing anything”.

“Letting them play just by saying a few words that they are against war, I don’t believe this is enough,” he said.

Former world number 13 Dolgopolov has returned to Kyiv to join Ukraine’s territorial defence unit and has had recent military training to learn how to use weapons.

While he was speaking to BBC Sport the air raid sirens in the city were sounded, and he said it was “tough” to see “terrible things” happening in his country.

Russia and Belarus have been suspended from international tennis team competitions following Russia’s invasion of Ukraine.

But the International Tennis Federation (ITF) and both the ATP and WTA tours have allowed players from both countries to continue competing as neutral individuals “at this time”.

Medvedev has said he wants peace in the world, and his compatriot Andrey Rublev, the world number seven, signed a camera lens with a “no war please” message at a recent tournament in Dubai.

But Dolgopolov said he was disappointed by the stance being taken by tennis authorities.

“I know all those guys personally. I even played Daniil when I was playing. They are nice guys but no offence to them – I believe Russia should be blocked from any participant in any sport, in any culture,” he said.

“I think every Russian is responsible for their government and their president.

“Just being neutral, taking away their flag, we know that is not changing anything. And even the sanctions that are happening now, even the destroyed economics it is not enough for [Russian President Vladimir Putin] to stop.”

Dolgopolov said he has told an ATP representative that tennis should go further.

“I already said this to them that I think tennis is being too passive,” he said.

“I think it is not enough to say ‘we are against war’. We hear ‘we’re against war’ everywhere, in Miss Universe, in the Oscars. Yeah, that’s great, but they don’t ask the children or the women here any questions.”

Dolgopolov said it was “inspiring” to see a number of Ukrainian sportspeople, including fellow tennis player Sergiy Stakhovsky, signing up to fight.

To prepare himself for his return to Ukraine, Dolgopolov had several days of military training from an ex-soldier.

“Going to a place like this you would like to understand how a gun works,” he said.

“So it doesn’t mean that I will need it – I don’t know if I do. It means that I can defend myself. And if I appear in some battle I will shoot and I will hit the point.”

Explaining what his overriding emotion was at this time, Dolgopolov said: “Anger. My girlfriend was trying to leave with her child, that was maybe 10 days ago. Their car got shot with some Kalashnikovs or something. They are OK but three cars in front of them were destroyed.

“They are killing civilians, whole families, she told me that one of her friends’ family got killed with children, with women. So we just feel anger.”