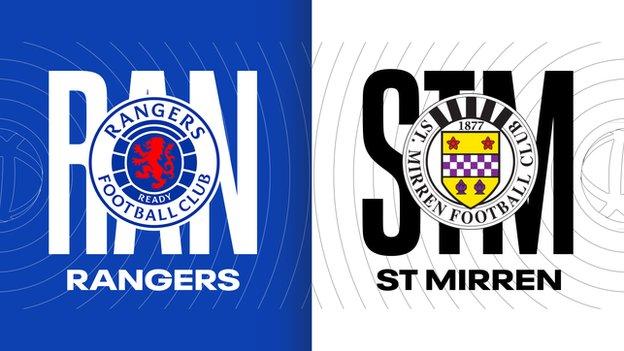 Rangers boss Giovanni van Bronckhorst says his side “go into the break in the place they want” after brushing aside St Mirren to maintain a commanding six-point Scottish Premiership lead.

Scott Wright squeezed in an opening header before Alfredo Morelos slammed in a first-half second at Ibrox.

The hosts failed to add to their advantage after the interval, but were never under any threat.

“I’m happy with the performance, it was very controlled,” Van Bronckhorst said.

Speaking to RangersTV, the Ibrox manager added: “The scoreline needs to be more when you see the chances we created. The movement and passing was good. We could’ve scored more, but the intention was there to keep going and create chances.”

Rangers are now unbeaten in 27 home league matches – since a 1-0 defeat to Hamilton Academical in March 2020 – and have dropped just six points in their last 18 Premiership fixtures.

Second-placed Celtic will need to hope they can drop the same figure at the very least in their final 18 games of the 2021-22 season or the reigning Premiership champions will retain their crown.

As for the ninth-placed Paisley side, their winless run extends to 11 games and means they go into the winter shutdown just three points off the relegation play-off spot.

Considering Rangers had won each of the last 10 top-flight meetings and their last eight on Boxing Day prior to kick-off, the omens did not look good for Jim Goodwin – even with some key players returning for the trip to the champions.

But with Celtic easing to victory at St Johnstone earlier in the day, pressure was on Giovanni van Bronckhorst’s men to restore their six-point advantage.

The Dutchman named a bold attacking line-up, not for the first time in his short Ibrox tenure, and was rewarded for it when Wright opened the scoring after a wave of early pressure.

Jak Alnwick did his best to claw away the ex-Aberdeen forward’s header, but the former Rangers keeper could not prevent the ball from crossing the line.

A rare venture forward for the visitors resulted in Alan Power slipping in striker Curtis Main, who was chopped down by Connor Goldson on the edge of the box.

Some visiting players screamed for a red card, but the Rangers defender was shown yellow by referee Steven McLean.

At the other end, the hosts continued to pepper the St Mirren backline and doubled their advantage when Borna Barisic’s inch-perfect cross found Morelos.

The Colombia international forced Alnwick to the back post to make a fine stop, but the rebound fell into the path of the striker to blast in a second.

Alnwick was called into further first-half action, again denying Morelos before smothering a Joe Aribo effort, and it was more of the same following the break.

Barisic and Ianis Hagi both saw efforts fly off target, while Wright came inches away from adding a third when the game’s opening goalscorer drilled a finish off the far post.

St Mirren had a tame handball shout turned down and were fortunate to keep 11 men on the park when Ethan Erhahon’s studs connected with James Tavernier’s upper thigh.

Moments later, the Rangers captain had Alnwick at full stretch to parry away a half volley before Morelos and Scott Arfield passed up chances to add a third.

A more clinical second half would have resulted in a more convincing scoreline for the league leaders, but three points is all that mattered as the hosts go into 2021 with a healthy advantage.

Man of the match – Alfredo Morelos

What did we learn?

All you have to do is cast your eyes to Wednesday to see the difference in squad depth between Rangers and nearest challengers Celtic.

Celtic’s lack of options saw them drop two points in Paisley, while Van Bronckhorst’s long list of attacking talent allowed him to blow away Goodwin’s side early.

The Ibrox boss is the first Premiership manager in over a decade to win his first seven top-flight games and a number of players are getting back to their best under the 46-year-old.

At this rate, February’s Old Firm derby looks like it may well act as a title decider even at a relatively early stage. A six-point gap looks steep; anything more looks beyond Ange Postecoglou’s men.

It was always going to be a huge ask for Goodwin’s side to repeat Wednesday’s performance levels, but the break will allow the Paisley side to get bodies back for a big second half of the season as they look to pull away from the foot of the table.

Following the winter shutdown, both sides make their return to Premiership action on 18 January (19:45 GMT) as Rangers go to Aberdeen and St Mirren travel to Dundee United.

Player of the match