Why 2022 is a defining year for England’s women

Heather Knight heads into the new year knowing it will be a defining one for her England side, built on the back of a huge 2021 for the women’s game.

They start in Australia, with just the small matter of the best team in the world standing between them and the Ashes.

Two months later they move on to New Zealand to defend the 50-over World Cup that was claimed in thrilling fashion at a sun-kissed Lord’s five years ago.

Then it’s back home for the domestic summer and a chance to win a gold medal as women’s cricket appears at the Commonwealth Games for the first time.

Whichever way you look at it, it is one hell of a year for England. 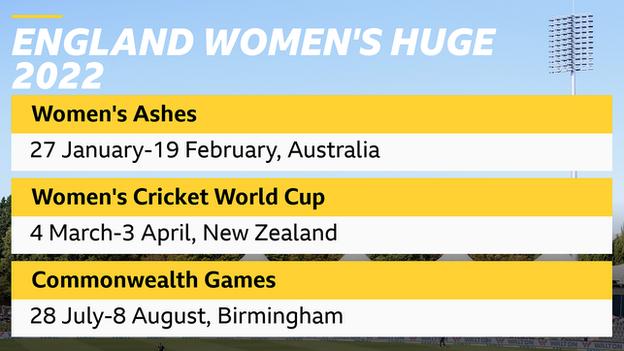 Talk about starting the year with a bang.

England arrive in Australia without having won the Ashes for eight years – although their last victory in the format did come away from home.

Knight’s side have endured some torrid times against Australia. They lost the Test on home soil in 2015 and had one of their worst batting performances in the final one-day international in 2019, when they were bowled out for 75 by an inspired Ellyse Perry.

Tests in Australia have tended to be a little on the flat side, with Perry scoring centuries for fun. But both sides go into the match at Canberra with more red-ball miles in their legs, having played a Test against India in their respective home summers.

The multi-format series means that there is value in every game. It also means that, if one team gets on a roll, it can be difficult to stop them.

But this England side has a different air to it than the one that travelled to Australia last time out. Coached by Australian Lisa Keightley, they play their cricket in a more positive fashion, and have a nice mix of youth and experience in their squad.

It won’t be easy but there are opportunities there for England. A good start in the Test will be key.

Then a World Cup defence

England’s triumph in 2017 was a watershed moment, played in front of a full crowd at Lord’s, with Knight lifting the trophy 46 years after Rachael Heyhoe-Flint claimed the inaugural title.

A crowd of 24,000 watched from the stands as England beat India by just nine runs in a breathless finale.

England’s fortunes have been mixed in the 50-over game since. They have won 23 of their 38 ODIs, including series victories over India and New Zealand. But they have beaten Australia, their main rivals, just once in six outings.

For the longest time, it felt as though you could predict England’s XI for each match. Consistency is no bad thing, and England will, rightly, point to the important of experience in big matches. However, England now have genuine options.

Whether it is those who debuted over the summer, the return of left-arm seamer Tash Farrant or the developing youngsters like 17-year-old Alice Capsey, there is strength in depth. Sophia Dunkley has strengthened the batting line-up, while off-spinner Charlie Dean took wickets for fun against New Zealand in the back end of the season.

Australia will be favourites, as they always are. South Africa, who England have struggled against at global tournaments, are also shaping up strongly, while India will be looking to avenge their loss at Lord’s.

But England have more options than ever – something that will serve them well over a month-long tournament.

And a Commonwealth Games debut

England will be one of eight nations competing for a medal as women’s cricket is included in the Commonwealth Games for the first time.

The Twenty20 matches will be held at Edgbaston across nine days, with England drawn in a group alongside South Africa, New Zealand and a qualifier who will be decided in January.

Birmingham 2022 will be the first time any T20 cricket has been played at the Games, with men’s 50-over cricket featuring in the 1998 tournament in Kuala Lumpur.

Australia are – surprise, surprise – the favourites, and are likely to bring a full-strength team as they hunt for a gold medal to add to their already packed trophy cabinet.

The Games will act as preparation for the next T20 World Cup, which takes place in South Africa in 2023, but it will also take the game to a wider audience, with the Commonwealths often attracting huge audiences.

The tournament is set to have the the largest female and Para-sport programme in history, featuring more women’s than men’s medal events for the first time at a major multi-sport event.

England’s netball gold in 2018 was a huge boost for the sport, with the winning moment being shown repeatedly and participation in the game rising by 80% in the first year after the Games.

The Games offers England a chance to play in front of a wider audience, with matches shown on free-to-air TV in their own backyard. It could provide a huge filip for a game that is already growing summer on summer.