Why there’s hype around Musiala

When Jamal Musiala left the Chelsea academy in the summer of 2019, it was in the hope he could accelerate his progress at Bayern Munich.

More than two years later, the 18-year-old has racked up 2,099 minutes in the Bayern first team, with a combined goals and assists tally of 18 – that’s an impressive goal contribution every 117 minutes.

Musiala could well feature against Barcelona in the Champions League on Wednesday, with his side already guaranteed a spot in the last 16.

So why is there so much excitement around the young German international, who played youth football for England, and what exactly does he offer?

Creativity from the flanks

Under the tutelage of Hansi Flick with Germany and Julian Nagelsmann at Bayern, Musiala has principally played as a winger – on both flanks – in a 4-2-3-1 formation.

While many wingers either prefer to drift inside and create, like Jadon Sancho, or look to beat full-backs, like Bukayo Saka, Musiala has a finely tuned balance between both of these styles.

But perhaps his biggest strength is his close control and his ability to manipulate the ball in tight spaces, even honing this craft with a neuro-athletics specialist, Steffen Tepel, who has said, “Musiala plays as if he has a magnet on his foot”.

And it’s when he comes off the left wing he shows highlights of creativity, particularly for Germany – his clever cut-back to Leon Goretzka to send Germany into the knockout stages of Euro 2020.

And he adds to that a goalscoring threat, possessing a lovely method of curling the ball with the instep of his right foot, giving him another weapon when cutting inside from the left wing. 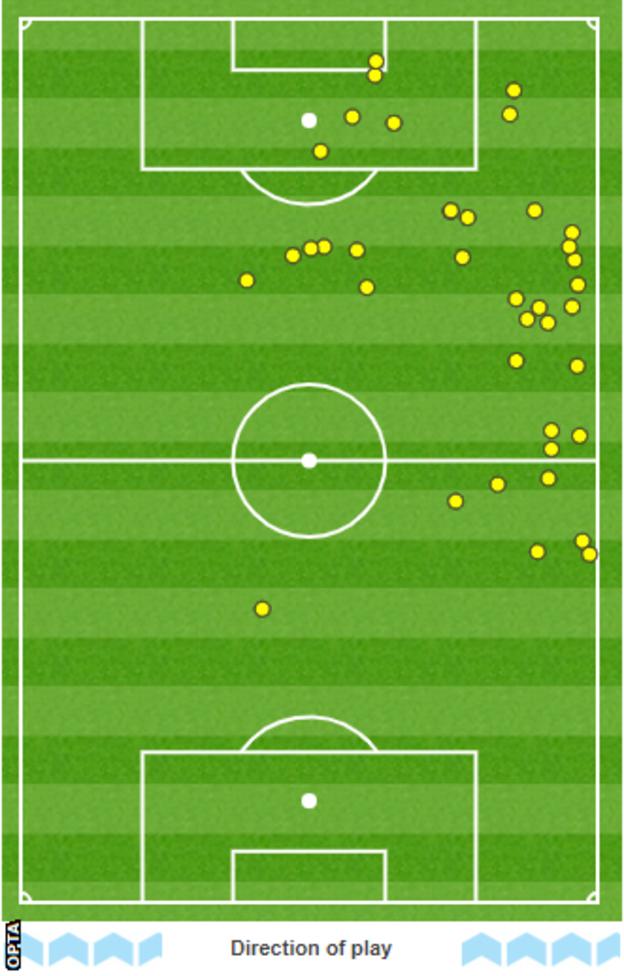 A man for many positions

A Bayern midfield injury crisis led to the then 17-year-old Musiala’s initial run in the first team towards the end of 2020.

Having come through the Chelsea academy as a striker and then dropped back into a number 10 role, central midfield has never been Musiala’s favoured position, yet he adapted quickly.

Among those games was a top-of-the-table clash with RB Leipzig, and a Champions League group game against Diego Simeone’s Atletico Madrid, with the common theme Musiala’s defensive discipline, winning 11 out of his 16 ground duels across the two games.

He was also able to impose himself in attack, scoring a long-range strike against Leipzig and being able to outmanoeuvre Atletico’s experienced midfield of Saul Niguez and Koke, who struggled to pick up his movement between the lines.

He completed three take-ons against Atletico – the second most in the game for Bayern – in just 76 minutes and stood up to Simeone’s famously aggressive off-the-ball approach, by showing security in possession with a 92% pass accuracy.

Musiala has shown this versatility ever since playing as the number 10 in Bayern’s 4-2-3-1 shape, and in recent weeks Nagelsmann has even suggested Musiala might be used as a defensive midfielder in the number six position.

“With Jamal, in retrospect, I am annoyed that I didn’t test him at the six. I should have done that earlier. I trust him to do it,” said the Bayern boss.

With Musiala’s ability to excel in numerous roles, the question remains – in which position will his future lie?

Bayern are very well-stocked in the wide positions, with Nagelsmann restoring Leroy Sane as a mainstay on the left wing.

The ex-Manchester City winger has a combined 19 goals and assists in 19 starts for Bayern this season while Serge Gnabry and Kingsley Coman have been rotated in the right-wing slot.

Sane, Gnabry and Coman are 25, 26 and 25 respectively so are likely to spend their peak years at the Bavarian club.

This may mean Musiala’s most likely area to become a Bayern starter is in a central role. Thomas Muller is now 32 and, although his performances have not dropped off, his age dictates a need for a succession plan in the number 10 role, with SportBild reporting Musiala is seen as Muller’s natural replacement by the club.

But it is Muller’s more nuanced off-the-ball duties that Musiala will need to bring to his attacking talent.

Muller showed as recently as this weekend his ability to win the ball in high positions, by robbing Mats Hummels for Robert Lewandoski’s goal in Der Klassiker against Borussia Dortmund.

Muller’s ability to sense pressing triggers and act on them is phenomenal and Musiala certainly has the athleticism for the role (according to FbRef, he has averaged 24 pressures per game in the Bundesliga and Champions League in the last 12 months compared to Muller’s 22), but he will need to learn Muller’s intelligence of timing his pressing actions.

Encouragingly, Muller himself has hinted at Musiala’s work ethic: “The peculiarity is that in addition to his talent, he also has a great character. He is hard-working, confident and does not turn up his nose.”

Game time has been harder to come by for Musiala this season, but after finishing third in the 2021 Golden Boy award – a prestigious title given to the best player aged 21 or under in Europe’s top five leagues – the stage could be set for him to shine against Barca.