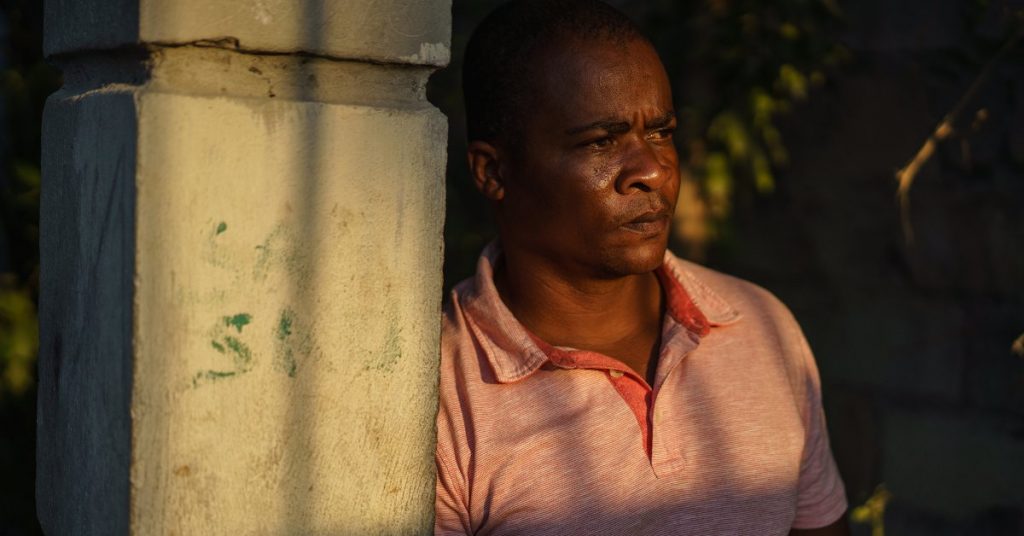 A Haitian Man’s Struggle With US Border Agents Sparked Fury

The world first saw Mirard Joseph on one of the worst days of his life.

On Sept. 19, 2021, he came to embody the plight of thousands of Haitian migrants after an image taken that day of his attempt to escape a U.S. Border Patrol (USBP) agent on horseback in Del Rio, Texas, spread across the internet and was broadcast on every major news network. While Joseph ran, clinging to plastic bags filled with food, the agent wrenched his shirt. The horse’s rein seemed to coil like a whip.

The image, captured by New Mexico– and Texas-based photojournalist Paul Ratje, stoked national debate over migration at the U.S.-Mexico border, enduring racism in American institutions, and the unique experience that Black immigrants face. Joseph, along with his wife Madeleine Prospere and their daughter, who just turned 2, had been living with some 15,000 other mostly Haitian migrants in makeshift tents in Del Rio.

A U.S. Border Patrol agent tries to stop Haitian migrant Mirard Joseph from entering an encampment on the banks of the Rio Grande near the Acuña-Del Rio International Bridge in Del Rio, Texas on Sept. 19, 2021.

Many Americans saw Ratje’s photo as evidence of the country’s broken immigration system. Others, including the NAACP and Vice President Kamala Harris, argued that it evoked an ugly history of slavery. In the days after the incident, President Joe Biden condemned the USBP’s use of horses in the arrests, and U.S. Customs and Border Protection launched an internal investigation into the Del Rio horse patrol. “We—our entire nation—saw horrifying images that do not reflect who we are, who we aspire to be, or the integrity and values of our truly heroic personnel in the Department of Homeland Security,” Secretary of Homeland Security Alejandro Mayorkas said, adding that the images “painfully conjured up the worst elements of our nation’s on-going battle against systemic racism.”

Federal agents in Del Rio were reportedly furious at the Biden Administration’s reaction. Many USBP supporters defended the scene captured in Ratje’s photo, arguing that the agent was doing his job. Ratje weighed in too, saying he couldn’t confirm if the agent had used the rein as a whip—a comment that, amid the controversy, took on a life of its own in conservative media outlets. “I was portrayed as … giving [the agents] a pass,” he says.

On Dec. 20, 11 Haitian migrants, including Joseph and Prospere, filed suit against the U.S. government, claiming that they had been treated unlawfully by being denied an opportunity to seek asylum in Del Rio. Joseph and Prospere, according to their lawyers, felt unsafe in Chile, and feared kidnapping if they returned to Haiti. Joseph also claims, per court documents, that a border agent “lashed at” him.

A street scene in Delmas, Port-au-Prince.

Meanwhile, Ratje could not shake the thought that his image omitted any detail about the man at the center of it. In an era of global migration, the subject of his photo had been essentially erased—co-opted by a set of diverging political narratives much larger than any one person. “I don’t think that migrants see themselves as migrants,” Ratje says. “They see themselves as human beings.” It’s the rest of us who “have this idea of migrants, and we dehumanize them that way.”

Joseph is staying with a friend in a Port-au-Prince “lakou”—a type of building compound common in Haiti where multiple families live together. Joseph has struggled to find housing since he was expelled to Haiti.

Haitian migrants leave the Toussaint Louverture International Airport after being expelled from the U.S.

In the days after he took the photo, Ratje set out to find his subject, walking the length of the tent city and giving out his contact information to anyone who would take it. Months later, in December, Ratje’s phone rang. A quiet Haitian Creole speaker was on the line. It was Joseph.

In December and January, Ratje traveled twice to Port-au-Prince to meet Joseph in person. For Joseph, meeting Ratje—in his first interview since the photo was taken—was an opportunity to tell his story on his own terms. For Ratje, it was a chance to layer the humanity of an individual onto an image that has come to represent a global plight.

People gather in front of a busy immigration office in Port-au-Prince on Jan. 24.

In the days after his now infamous struggle with the USBP agent, Joseph, Prospere, and their toddler were detained. A few days later, U.S. border officials loaded them onto a plane bound for Haiti. Joseph was chained by his wrists, waist, and feet; Prospere was shackled too, but allowed to carry their baby.

When they landed, friends and family showed Joseph the photograph, which had been reproduced in countless articles, and asked if it was him. Reluctantly, Joseph admitted it was. “I had tears in my eyes,” he says in Haitian Creole. Naturally shy, he was embarrassed by the ordeal. “It’s the worst humiliation I have endured in my life,” he says. “The horse humiliation and the cuffs.”

Raised in Saint-Louis du Nord, a small coastal city in northern Haiti, Joseph says he’s spent his life avoiding violence. He grew up playing soccer in the streets, where he became a lifelong fan of the Spanish team Real Madrid. Now 42, the father of six, he still slips away whenever he can to watch soccer or the Los Angeles Lakers, his neck bent over his phone, a quiet smile tripping across his normally reserved face.

Like millions of other Haitians, Joseph has never had much, and in recent years poverty has worsened. In 2010, the island was devastated by a massive earthquake, then a wave of pile-on problems: homelessness, hunger, cholera outbreaks, spikes in violence. In July, President Jovenel Moïse was assassinated, plunging the nation into political uncertainty; a month later, another massive earthquake tore through. These conditions, both environmental and political, have driven what is now one of the largest emigration flows in the western hemisphere, according to the Migration Policy Institute. Since 2010, nearly 650,000 Haitians have left home; many have landed in Brazil, Chile, and other Latin American countries. Joseph and Prospere joined this diaspora in 2017, traveling to Chile, where Joseph found work—and almost lost a finger—at a propeller factory. Their daughter was born there.

In 2021, in the wake of the COVID-19 pandemic, global economies constricted, jobs dried up, and many countries’ visa requirements became more stringent. Thousands of Haitians were again forced to migrate, and this time many headed for the U.S.-Mexico border. Joseph and Prospere traveled with their baby overland from Chile through the Darién Gap, a treacherous expanse of jungle between Colombia and Panama that kills dozens of people every year, per the International Organization for Migration (IOM).

In September, when Joseph and his family finally arrived in Del Rio, they had no idea of the political and bureaucratic barricade that awaited them. In 2020, the U.S. had invoked an obscure public-health rule, Title 42, that allows U.S. immigration officials to expel anyone crossing the border, even if they intend to seek asylum. Under those rules, most migrants are expelled to Mexico, but Haitians are sent all the way back to their home country. Between Sept. 19 and Feb. 26, more than 18,000 Haitians were expelled from the U.S. and returned to Haiti, according to IOM.

In the days before Ratje took his now famous photo, Joseph and his family had been sleeping on cardboard on the ground in dusty Del Rio, and their baby developed a respiratory and gastrointestinal illness, according to court documents. The documents also state that the U.S. government was providing food, but not enough—just bread and bottled water. “I’ve never seen anything like the situation in Del Rio,” says Ratje, who had been photographing the conditions of the encampment on assignment for Agence France-Presse. Unlike other camps along the U.S.-Mexico border, this one was on U.S. soil.

A young girl walks in front of the ruins of the Notre-Dame Cathedral church, which was damaged in the devastating 7.0-magnitude 2010 earthquake, in downtown Port-au-Prince.

A statue of the Virgin Mary in St. Peter’s Church in Petionville, Port-au-Prince.

Joseph’s youngest daughter Fraurie Joseph Prospere, 2, traveled with him and his wife, Madeleine Prospere, to Del Rio in September 2021. Prospere and Fraurie, who was born in Chile, migrated back to Chile, where Joseph hopes to join them.

Thousands of Haitians hoping to request asylum in the U.S. were expelled by plane back to Haiti, where they were greeted with tents at the Toussaint Louverture International Airport in Port-au-Prince.

On the day his photograph was taken, Joseph had taken the short trip from Del Rio to Ciudad Acuña, on the Mexican side of the border, to buy food for his family. He was attempting to return to Del Rio when the border agents galloping in “nearly trampled him,” per court documents. For Joseph, the encounter recalled memories of living in fear of violence in Haiti. “It’s as if [the agent] had something personal with me,” he says.

That this brutal experience made Joseph an accidental celebrity has worn on him. Sometimes, he says, if someone recognizes him from the photograph, he’ll deny it’s him, just to avoid the conversation. But other times, Joseph has sought out the chance to share his story, glad to reclaim at least some agency in the painful ordeal.

Mirard Joseph, inside a friend’s home where he is staying in Port-au-Prince, says he plan to return to the U.S. to claim asylum as soon as he has the resources.

Ratje’s photograph is hardly the first to ignite debate over migration. Consider the image of Alan Kurdi, the Syrian toddler whose tiny, lifeless body washed up on the shore of Turkey in 2015. Or the photograph of Óscar Alberto Martínez Ramírez and his daughter, Angie Valeria, who were shown facedown in muddy water after drowning trying to cross the Rio Grande in 2019. Those bleak images also sparked international debate about the movement and treatment of desperate people. But such conversations are almost always once removed. They unfold as a public discussion over politics or the nuances of policy. If they touch at all on our ethical obligations to one another, only rarely do they take in more of an individual’s life than his or her status as a migrant.

By finding Joseph, Ratje was trying to prevent that pattern from repeating. “As photographers, it’s important to show these things that are going on,” he says, “but we need to also look at the effect that they have on the people who are in these pictures. I didn’t want [Joseph] to just be another one of these people who we call migrants who disappear into the shadows.”

On the day Ratje had arranged to meet his former subject in Port-au-Prince, Joseph wore his best clothes. The last time Ratje had captured his image, he’d been treated like a criminal. This time, Joseph wanted to be seen for the man he is, a human being with dignity.

—With reporting by Julia Zorthian/New York

Write to Jasmine Aguilera at jasmine.aguilera@time.com.