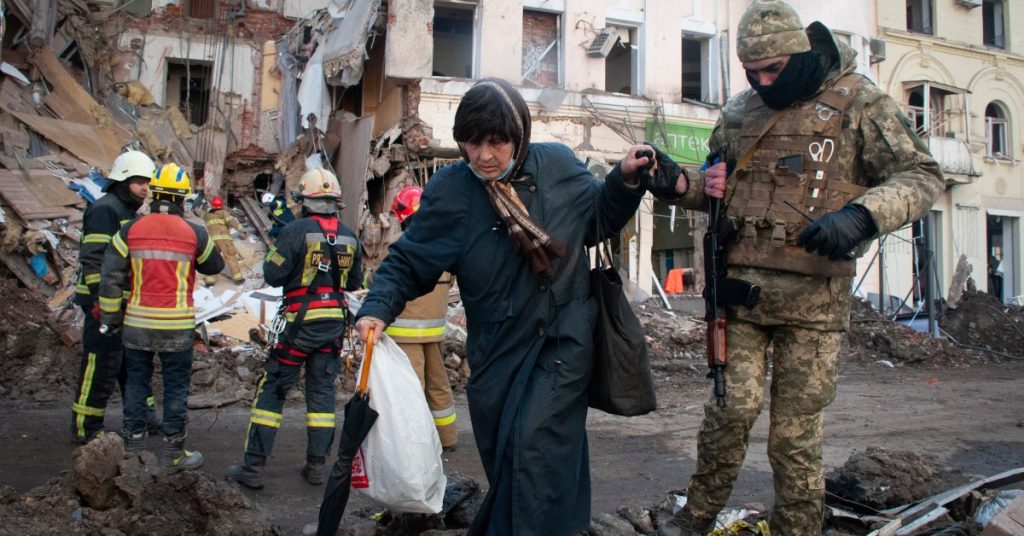 KYIV, Ukraine — Ukrainian authorities struggled to determine the fate of hundreds of civilians who had been sheltering in a theater smashed by a Russian airstrike in the besieged city of Mariupol as officials said Russian artillery Thursday destroyed more civilian buildings in another frontline city.

A photo released by Mariupol’s city council showed an entire section of the large, 3-story theater had collapsed after the strike Wednesday evening. Several hundred people had taken refuge in the building, seeking safety amid Russia’s 3-week, strangulating siege of the strategic Azov Sea port city.

At least as recently as Monday, the pavement in front of and behind the once-elegant theater was marked with huge white letters spelling out “CHILDREN” in Russian, according to images released by the Maxar space technology company.

Rubble had buried the entrance to the shelter inside the theater, and it was not yet known how many people were killed or injured, Pavlo Kyrylenko, head of the Donetsk regional administration, said on Telegram.

Russian airstrikes also hit a municipal swimming pool complex in Mariupol where civilians, including women and children, had been sheltering, Kyrylenko said. “Now there are pregnant women and women with children under the rubble there,” he wrote, thought the number of casualties was not immediately known.

“My heart breaks from what Russia is doing to our people,” Ukrainian President Volodymyr Zelenskyy said Wednesday night after the theater strike. Hours earlier, he delivered a speech via video to the U.S. Congress that garnered several ovations as he called for more help.

The Russian defense ministry denied bombing the theater or anywhere else in Mariupol on Wednesday.

On Thursday, Russian artillery destroyed a school and a community center in Merefa, a city near the northeast city of Kharkiv, according to Merefa’s mayor Veniamin Sitov. There were no known civilian casualties. The Kharkiv region has seen heavy bombardment as stalled Russian forces try to advance in the area.

Six nations have called for a U.N. Security Council meeting on Ukraine on Thursday afternoon, ahead of an expected vote Friday on a Russian resolution demanding protection for Ukrainian civilians “in vulnerable situations,” yet making no mention of Moscow’s responsibility for the war.

“Russia is committing war crimes and targeting civilians,” Britain’s U.N. Mission tweeted, announcing the call for the meeting that was joined by the U.S., France and others. “Russia’s illegal war on Ukraine is a threat to us all.”

Russian attacks have battered cities and villages across large parts of Ukraine, including the capital, Kyiv, where residents have been huddling in homes and shelters.

A fire broke out in a Kyiv apartment building early Thursday after it was hit by the remnants of a downed Russian rocket, killing one person and injuring at least three others, according to emergency services. Firefighters evacuated 30 people from the top floors of the 16-story building and extinguished the blaze within an hour.

Russian President Vladimir Putin went on television to Wednesday excoriate Russians who don’t back him, even as both sides expressed optimism over efforts to negotiate an end to the fighting.

Russians “will always be able to distinguish true patriots from scum and traitors and will simply spit them out like a gnat that accidentally flew into their mouths,” he said. “I am convinced that such a natural and necessary self-purification of society will only strengthen our country.”

He said the West is using a “fifth column” of traitorous Russians to create civil unrest.

“And there is only one goal, I have already spoken about it — the destruction of Russia,” he said.

The speech appeared to be a warning that his authoritarian rule, which had already grown tighter since the invasion began on Feb. 24, shutting down Russian news outlets and arresting protesters, could grow even more repressive.

In a sign of that, Russian law enforcement announced the first known criminal cases under a new law that allows for 15-year prison terms for posting what is deemed to be “false information” about the Ukraine war. Among those charged was Veronika Belotserkovskaya, a Russian-language cookbook author and blogger living abroad.

But it also came amid signs that talks were finally making progress.

Russian Foreign Minister Sergey Lavrov said after Tuesday’s meeting that a neutral military status for Ukraine was being “seriously discussed” by the two sides, while Zelenskyy said Russia’s demands for ending the war were becoming “more realistic.”

“This is possible only through direct dialogue” between Zelenskyy and Putin, he tweeted.

An official in Zelenskyy’s office told The Associated Press that the main subject under discussion was whether Russian troops would remain in separatist regions in eastern Ukraine after the war and where the borders would be.

The official, speaking on condition of anonymity to discuss the sensitive talks, said Ukraine was insisting on the inclusion of one or more Western nuclear powers in the negotiations and on a legally binding document with security guarantees for Ukraine. In exchange, the official said, Ukraine was ready to discuss a neutral status.

Russia has demanded that NATO pledge never to admit Ukraine to the alliance or station forces there.

Earlier Wednesday, Zelenskyy went before the U.S. Congress via video and, invoking Pearl Harbor and 9/11, pleaded with America for more weapons and tougher sanctions against Russia, saying: “We need you right now.”

President Joe Biden announced the U.S. was sending an additional $800 million in military aid to Ukraine. He also called Putin a “war criminal,” in his sharpest condemnation since the invasion began.

Although Moscow’s ground advance on the Ukrainian capital appeared largely stalled, Putin said earlier that the operation was unfolding “successfully, in strict accordance with pre-approved plans.” He also decried Western sanctions against Moscow, accusing the West of trying to “squeeze us, to put pressure on us, to turn us into a weak, dependent country.”

The fighting has led more than 3 million people to flee Ukraine, the U.N. estimates. The death toll remains unknown, though Ukraine has said thousands of civilians have died.

Nowhere has suffered more than the encircled city of Mariupol, where local officials say missile strikes and shelling have killed more than 2,300 people. The southern seaport of 430,000 has been under attack for almost all of the three-week war in a siege that has left people struggling for food, water, heat and medicine.

Using the flashlight on his cellphone to illuminate a hospital basement, Dr. Valeriy Drengar pulled back a blanket to show the body of a 22-day-old infant. Other wrapped bodies also appeared to be children.

“These are the people we could not save,” Drengar said.

—Associated Press writer Yuras Karmanau, in Lviv, Ukraine, and other AP journalists around the world contributed to this report.