England lock Maro Itoje is a doubt for their pivotal Six Nations match against Ireland at Twickenham after becoming unwell overnight.

England are “cautiously optimistic” Itoje will be available, but he will miss Friday’s captain’s run.

Forwards coach Richard Cockerill will not be at Twickenham after testing positive for Covid-19.

Joe Launchbury is England’s second row option on the bench, with lock Nick Isiekwe left out of the squad.

Both teams need victory to keep their title chances alive.

Ireland have been the more impressive side so far in this Six Nations and their confidence will be boosted by a convincing home win last year.

England defeated Wales last time out but they are still trying to find the right formula in this tournament.

Ireland thrashed 12-man Italy in round three although they have triumphed just once in London since 2010 in this championship.

England have been boosted by the availability of flanker Tom Curry, who passed the return-to-play protocols after he sustained a head injury in the first half against Wales.

They make three changes, with Sam Simmonds starting at number eight and Alex Dombrandt on the bench after coming out of Covid isolation.

Jamie George replaces the injured Luke Cowan-Dickie at hooker and Joe Marchant is preferred to Elliott Daly at centre, who drops to the bench.

Lock Launchbury is included among the replacements and could make his first Six Nations appearance in two years after recovering from a serious knee injury.

While Cockerill will miss the game, all the players and other staff tested negative on Friday.

Ireland captain Johnny Sexton – who announced earlier this week that he will retire after next year’s Rugby World Cup – starts for the first time in this tournament in one of six changes.

Centre Robbie Henshaw joins fly-half Joey Carbery in dropping to the bench, while full-back Michael Lowry, wing Mack Hansen and second-row Ryan Baird have been omitted from the matchday squad.

Andrew Cotter: “It is customary now for Eddie Jones to build up opponents and somehow portray England as the underdogs, but for this game there are few disagreeing with him.

“However, it’s worth noting that even in a golden era Ireland have only won once at Twickenham in their last eight visits. What’s more, England do have Tom Curry available.

“The one major loss for Ireland is Andrew Porter at loose-head prop – while replacement Cian Healy does brings plenty of experience he can’t match Porter’s sheer strength.

“But the visitors will be lifted by the return of Johnny Sexton to fly-half on what we now know will be his final Six Nations appearance for Ireland at Twickenham. A big player for a huge occasion with the winner remaining in the hunt for the title on the final weekend.”

View from both camps

England head coach Eddie Jones: “We’ve been looking at this game as a semi-final. Ireland are the most cohesive side in the world right now and it will be a good test this weekend.

“We’ve prepared really well for this game. We did some good team togetherness work in Bristol and had a solid week of training on the pitch here.

“We are looking forward to going after them in front of a great home crowd at Twickenham. It’s been special having 82,000 supporters back in for our Six Nations games and it will be a great Test match for them.”

Ireland head coach Andy Farrell: “We have to make sure England have a bump in the road.

“(The media) say they are building into the competition so we have to stop that. We have to go over there and prove to ourselves there is a performance in there that is a step above what we’ve shown already.” 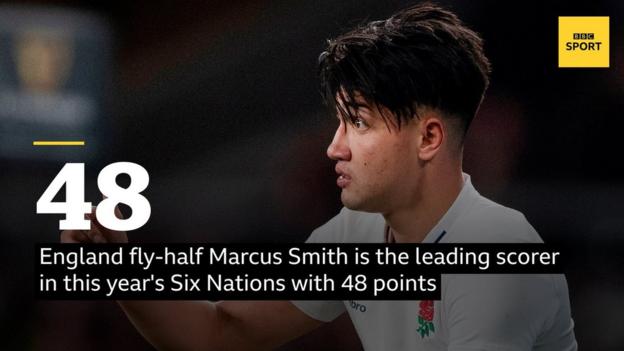 Previous Joshua could fight Wilder or Joyce – Hearn
Next What is a war crime, and could Putin be prosecuted over Ukraine?