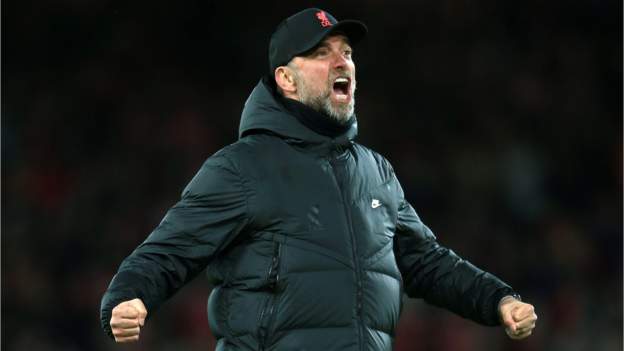 Liverpool manager Jurgen Klopp said he plans to challenge Manchester City in the Premier League title race by being “as annoying as possible”.

The two teams meet on 10 April at Etihad Stadium in what could be a title decider.

The Reds, who have a game in hand, face Arsenal on Wednesday and a win would see them reduce the gap to one point.

“That’s the plan [to push City],” said Klopp. “The plan is to be as annoying as possible. We have to win our games.

Liverpool are on an eight-game winning streak in the Premier League, while Wednesday’s opponents Arsenal have won their past five matches.

Klopp said they cannot count on taking points against the Gunners away from home, while Arsenal boss Mikel Arteta said it would be a big achievement for his side to win against Liverpool.

“Being able to beat the most in-form team in the country would be really, really big so that’s the aim tomorrow,” Arteta said.

Arsenal moved into the top four with three games in hand over fifth-placed Manchester United after a 2-0 win against Leicester on Sunday, but Arteta feels his team are still not among the best in the Premier League.

“We haven’t done anything,” he said. “What we are doing is try to improve, understand better what we want, being much more consistent in performance and results, but nothing else as yet.”